Please allow 5-6 weeks for made to order items : Need it sooner? get in touch via the ‘contact us’ form 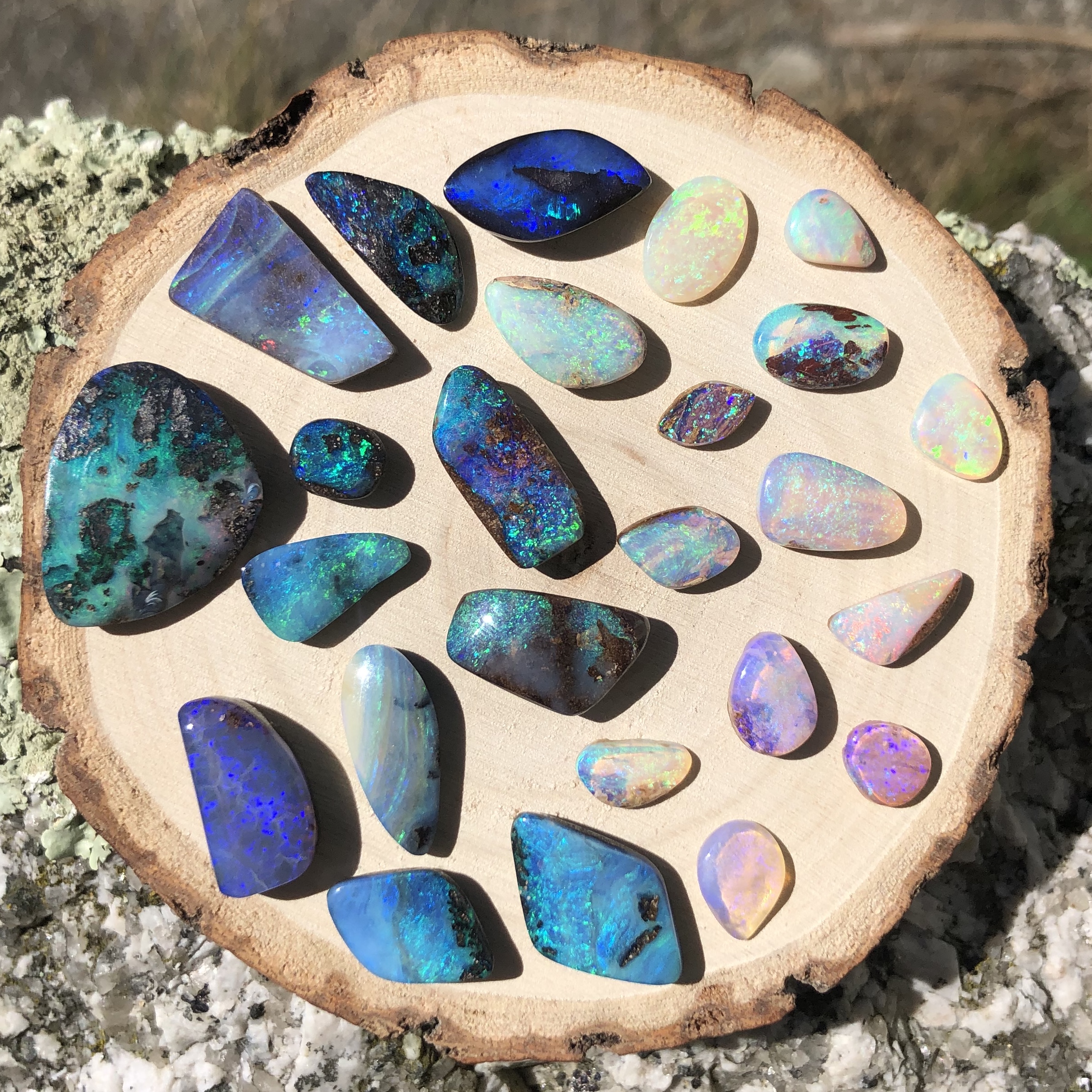 I source most of my opals direct from suppliers in Australia. I have established some fabulous relationships with a number of small companies who I can trust to provide the best cut and polished gems for my jewellery.

A lot of these suppliers have direct links to miners or mine the rough opal and cut it themselves, so it is fully traceable from mine to finished stone. This makes opals a great choice for ethical jewellery and I love being able to support other small business across the world when sourcing these beautiful gems.

A bit about The different types of opal we use…

Boulder opal forms in seams in ironstone boulders and is only found in Queensland. The opal is created over thousands of years when silica enters cracks within the rock. Boulder opals are often cut leaving the dark ironstone host rock on the back which shows off the beautiful bright colours. It sometimes features the host rock in the polished face making these stones highly unique looking. As well as ironstone boulders, in different regions like Koroit sometimes veins of vegetation can be found in the opal, like plants or trees, these are known as wood replacement opals and are pretty rare.

Pipe opal is a type of boulder opal and is found in Central Queensland opal fields. As the name suggests it is opal formed in a pipe or tubular formation. These roundish tubes are formed in host rock, which is commonly sandstone although they can also be found in ironstone too. Most pipe opal has green to blue colours play, although it can also feature more pink, purple tones. Quite often the pipe opal is transparent and the host sandstone can be seen through the face, it can have a very pretty glittery like fire.

Crystal opal is a term for any opal which has a transparent, translucent, or semi-translucent body. Often a type of black or white opal, it doesn’t have the same host rock as boulder, mainly being found in knobby or seam form in the southern mining fields of Coober Pedy, Lightening Ridge and Mintibie. Crystal opals appear at their brightest when on a black background so I always suggest either setting them on a darkened silver or with an open backed setting to get the most colour from the stone.

We mainly use SOLID OPALS in our jewellery, but we do also have opal doublets and occasionally triplets available too. Solid opals, are as the name suggests all naturally formed opal including the host rock it’s found in. You can normally tell a solid opal when looking at it unset, as where the opal joins the host rock it will usually be uneven and follow the natural undulations of the rock.

OPAL DOUBLETS are still genuine opal but are semi man-made. They are created from slices of opal that are too thin and fragile to be set as they are, and are instead glued to a backing of black potch/ obsidian or ironstone to create a more stable stone but with the appearance of a solid stone. As these stones contain a smaller carat weight of opal they are usually cheaper and make for a more affordable option for those that want the sparkle and colour of solid opal but at a more affordable price.

OPAL TRIPLETS are basically opal doublets, but with an added layer of clear quartz on top of the opal layer. This can accentuate the pattern in the opal and also protect it. I don’t often stock triplets as if worn in water over time the adhesive used to attach the top layer can become compromised and allow moisture in under the quartz making the stone appear cloudy. Generally triplets are better suited for earrings or pendants as they are less likely to have contact with water.

Opal Care : Looking after your opals

Opals like turquoise and pearls are on the softer side so extra care should be taken to avoid damaging them by knocking them or exposing them to moisture for prolonged periods.

At sea surf rocks we choose to only use Australian opals in our rings as they are non-porous and do not lose their fire or colour when exposed to water. That being said to be on the safe side we always recommend removing items with these stones before bathing, swimming or showering. ​ Contact with chemicals should be avoided, so remember to remove your opal ring before using any harsh cleaning products.

‘ARIEL’ in all her mermaid glory… complete w

Rose gold and purple opal… this combo never gets

NEW! Quite a few if you have been requesting simpl